What is regarded as the world's first motorway was built in Berlin between 1913 and 1921. AVUS, a 19 km long section ("Automobil-Verkehrs- und Übungsstraße") in southwestern Berlin was an experimental highway that was used for racing (occasionally it still is). It had two 8 meter lanes separated by a 9 meter wide median. Italy built several expressways in the 1920s and Germany followed with it's first "car-only roads" opening in 1929 between Düsseldorf and Opladen and in 1932 between Cologne and Bonn. In the early '30s more routes were planned and Adolf Hitler, seeing the propaganda benefits of a high speed road system (as well as the military and employment value), started a program to build two north-south and east-west links. The first of these "Reichsautobahnen" opened on May 19th, 1935 between Frankfurt and Darmstadt. The Autobahn network totaled 2,128 km at the end of World War II. Construction on new sections started again in 1953, with 144 km added between 1953 and 1958, bringing the total to 2,272 km. Starting in 1959, the Federal Republic began Autobahn expansion in earnest by embarking on a series of four-year plans that expanded the "Bundesautobahnen" system to 3,076 km by 1964.

Major additions followed during the next two decades and the system reached 4,110 km in 1970, 5,258 km in 1973, 6,207 km in 1976, 7,029 km in 1979, and 8,080 km in 1984. A new series of five-year plans, with the goal of putting an Autobahn entrance within 10 km of any point in Germany, had expanded the network to over 8,800 km by 1990. The reunification of Germany in 1990 put those plans on hold as the federal government focused on absorbing and upgrading the poorly maintained Autobahns it inherited from East Germany. The incorporation of those East German Autobahns put the total Autobahn network at almost 11,000 km in 1992. Additions to the unified network increased the total to 11,712 km in 2001 and 12,044 km in 2004. This makes the Autobahn network the third largest superhighway system in the world, after the United States and China. 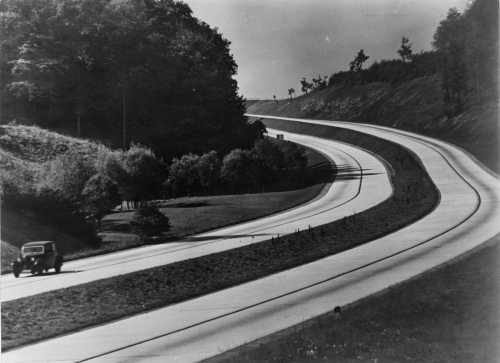 A German autobahn in the 1930s

Early Autobahns were rather crude by today's standards. The first Autobahns, like their Italian counterparts, featured limited-access and grade-separated crossings, but no medians. The first Reichsautobahnen did have narrow medians but lacked shoulders. Ramps and waysides had cobblestone surfaces. When Germany was reunified in 1989, the Autobahns of East Germany were in virtually the same condition as they were in 1945, exhibiting the aforementioned qualities as well as inadequate signing, infrequent and often non-functional emergency phones located in the center median, and service areas consisting of a dilapidated roadhouse next to a wayside. Newer West German Autobahns had for many years featured 3.75 meter wide lanes, shoulders, landscaped medians with crash barriers, frequent roadside emergency phones, and ample, well-adorned service areas. After reunification, the German government expedited upgrading of the old East German Autobahns in a series of "German Unity Transport Projects". By mid 2004, the program was over two-thirds completed, with about 850 km upgraded or newly-built Autobahn. 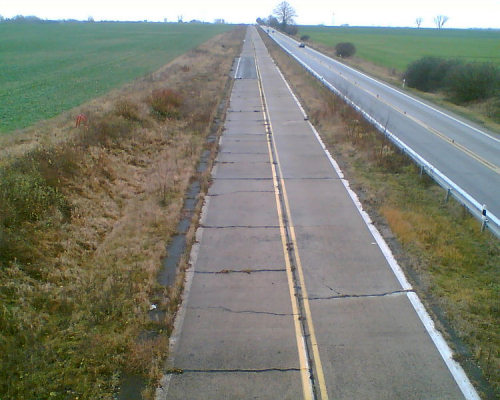 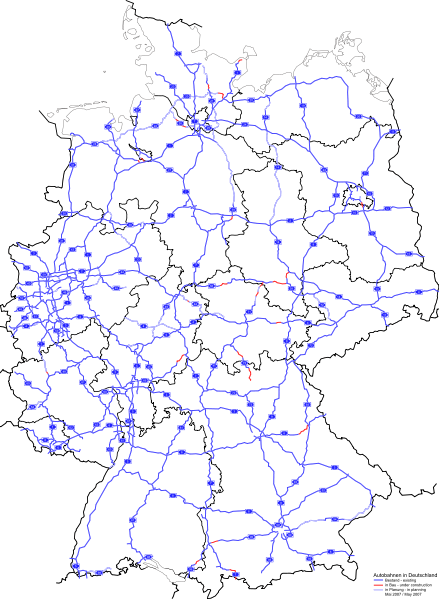