Because of Germany's location in central Europe, traffic on the Autobahn is generally quite heavy. In 2004, motorists logged a staggering 218.9 billion kilometers on the Autobahn, averaging almost 50,000 vehicles per day on any given segment. As a result, traffic jams (Stau) occur frequently on the Autobahn, especially on Fridays, Sundays, holidays, and anytime after an accident or during bad weather or construction. Regional traffic reports, with a variety of names including Verkehrsmeldungen, Verkehrsdienst, Verkehrsfunk, and Stauschau, are excellent and are provided on most radio stations. Germany is divided into several traffic reporting regions, "Verkehrsrundfunkbereich" signs along the road indicate the local radio stations carrying the traffic reports for the region you are in. You will need to have a working knowledge of German to understand them, though.

In addition to radio traffic reports, many sections of Autobahn are equipped with traffic monitoring systems and electronic signs (see below) to warn of downstream incidents or congestion and to reduce the speed of traffic as it approaches the jam. On sections without electronic signs, the Autobahn police (Autobahnpolizei) do an excellent job of warning of unexpected jams via portable signs, signs mounted on police cars parked along the shoulder, or on banners draped from overpasses. Traffic information is also available from several other resources including the websites of radio and TV stations, auto clubs, and government agencies, and increasingly through on-board telematics systems. 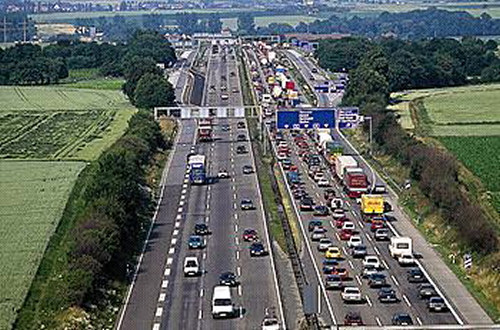 Sometimes the "traffic report" may include information that has nothing to do with traffic such as emergency alerts, police bulletins, etc. Also, if you have a German rental car with a cassette or CD player, don't be surprised if your Falco tape or disc is interrupted by reports of a Stau somewhere - German radio tuners continue to monitor the last - selected radio station even when a tape or CD is being played. Radio stations broadcast a special tone at the start of traffic reports which causes the tuner to switch the audio from the tape or CD to the radio so that you can hear the information. Traffic reports use one of several terms to describe varying levels of congestion: "Stau" usually means a colossal traffic jam where you'll probably get to know the people in the cars around you, "stockender Verkehr" indicates the only slightly more tolerable stacking or slow-and-go type traffic, while "dichter Verkehr" or "zähfliesender Verkehr" denotes the hardly-noteworthy heavy or sluggish but moving traffic.

As a stopgap measure to help improve traffic flow, traffic is now being permitted to use the emergency shoulder as a traffic lane during congested periods along some sections of Autobahn. Lane control signals, signs, or other cars doing so indicate when this is permissible. 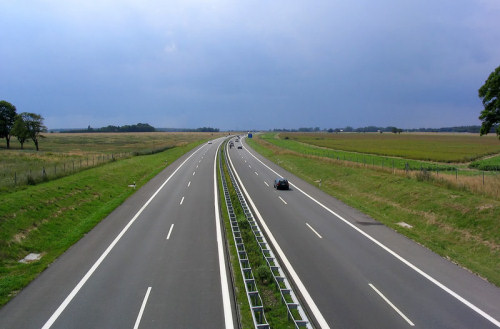 Low traffic congestion outside of Langsdorf 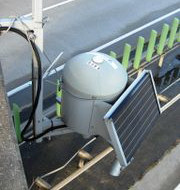