Signs and markings on the Autobahn 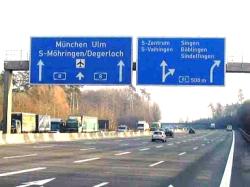 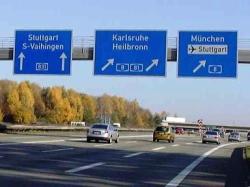 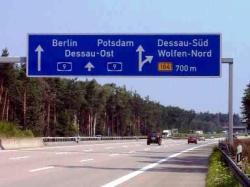 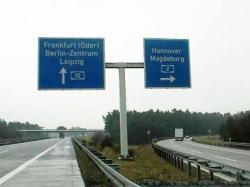 Overhead signs are being used increasingly more frequently. These signs generally take on the forms shown in the various pictures below. Note that the route number shields are typically located at the bottom of the signs rather than at the top like in the US. Drivers should also be aware that unlike the US, directions on the Autobahn (as well as other roads) are not given using the cardinal directions (North, South, East, West), but rather by destination cities. Know what the major cities are along your route before you start out. A helpful idiosyncrasy is the tendency to list major cities on signs for connecting Autobahns that lead toward the route that will actually take you to that city. The most important cities start appearing on signs hundreds of kilometers away. One other peculiarity is that when several cities are listed, the farthest city is generally listed first or on top; in the US, it's usually the opposite. The last place listed is usually the name of the next exit. Finally, you may come across names that include a one or two letter abbreviation (e.g. "S-Degerloch" or "HH-Zentrum"); these correspond to the official license plate registration city abbreviations and indicate an exit for a district or other destination in that city. So "S-Degerloch" would be the exit for "Stuttgart-Degerloch" while "HH-Zentrum" denotes "Hamburg-Zentrum", or "downtown Hamburg". 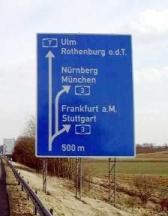 Autobahns bear a one, two, or three digit number with an "A" prefix (e.g. A8); however, the "A" is not shown on signs. The one and two digit numbers indicate mainline routes; three digit routes are spurs. Route numbers are assigned by region (e.g. the area around Munich is region 9, so most Autobahns in that area start with 9) and even-numbered routes generally run east-west while odd-numbered routes north-south. Route numbers for spurs and connectors usually start with the parent number followed by an additional digit or two to make three digits total (e.g. the A831 branches off of the A8; the A241 branches off of the A24.) Route markers are an oblong white and blue hexagon: